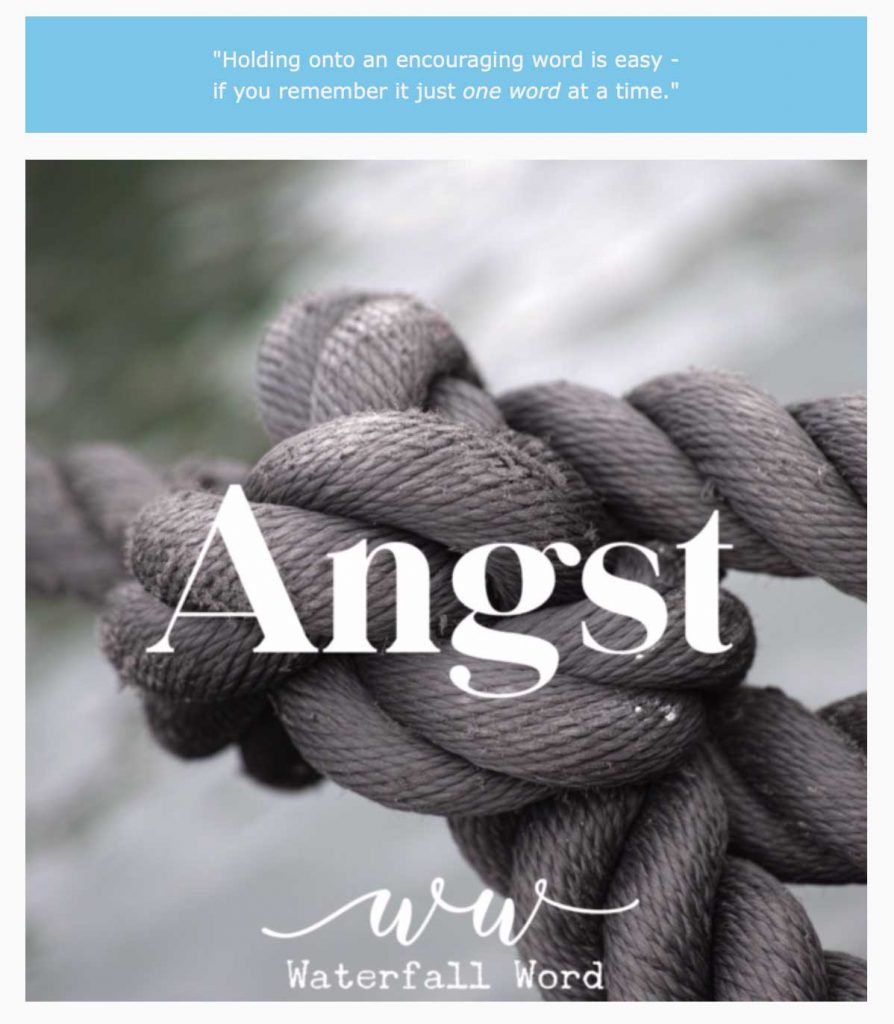 Angst – An acute but nonspecific sense of anxiety.

It’s a ordinary day, yet my stomach’s tied in knots.  Though no one around me seems to notice, inside me spins a dizziness, brought on by this mysterious dread.  I feel like I’m suffocating.  Excusing myself, I leave to gain my internal composure.

I slip into another room, the backyard, or even a restaurant’s vacant bathroom stall.  Whatever it takes.  Anywhere I can go to get away from everyone else’s view, that’s where I’m heading.  I’d look like such a fool if anyone could actually see what’s going on inside of me.

Once alone, I remind myself – for what seems like the hundredth time – ‘It’s just a feeling, it doesn’t mean anything.  It will pass…’  But, these hopeful mental chimes are mocked as the fear blows right past my head and grabs my heart.  I can literally hear my heart pounding in my own ears.  I swear I’ll have a heart attack this time. Struggling to take one deep breath after another, I again try to clear my head.

In this moment, the idea of stringing together a mental mantra of gratuitous thoughts is laughable.  I can’t think of anything positive at that moment – I can’t even think straight!

In a sense, I’m paralyzed.  I do my best to keep the panic at bay, but still, it creeps and climbs up from the depth of my insides…  I’m in a full blown internal wrestling match, and I’m pinned to the mat.

I have absolutely no idea why this is happening or how to stop it.  I’m trapped in this hellish cycle with no way out.

I am a prisoner of angst.

Contrary to how it feels in the moment, angst does eventually subside. Yet, it always seems to leave a shameful residue behind, a slimy cloak of whispers that wrap around me.  I believe what it tells me.  I am the loser.  I am weak.   I own these words and view this cruel emotion as my very own.

It has become my angst.

I lived this way for many, many years.  I believed the lie that I didn’t have a choice.  I was at angst‘s beckon call.  I believed I had to comply and hand over every moment it dictated me to give it.   How could I control a feeling, when I had no idea when it was going to hit, or why?

What was at the core of this angst that was running my life?   I didn’t know.

This not knowing was fueling more of the angst inside of me.  I questioned.  I wrestled.  I pleaded and begged God to make it go away.  It didn’t budge.

But, eventually, as I prayed, something did occur to me.  A light bulb went on. I realized this angst in me had located and plugged into my own sense of powerlessness.  It had been fueling and feeding off of this in me for years!!!

I realized angst was allowed to survive in me because I was believing a lie.  It was a lie I had been carrying around since I was a kid. A lie that was basically the equivalent of sitting in the dark with my hands tied behind my back.

Feeling powerless.  Feeling out of control. The fear of not knowing. Living a life filled with angst had become normal.  Because I didn’t have the answer, I assumed I had no choice. I had given over the reigns of my life to angst.

But, then, I realized the problem wasn’t that I didn’t have the answer.  The problem was that I wasn’t asking the right question.  “When and how did I decide that I would live a life dictated by my feelings?”

After this aha moment, it was like pulling a thread.  Angst’s power over me slowly began to unravel.  It began to lose it’s power source. Then, I began to actually unplug it.  Did it happen overnight?  Definitely not. Did I slip backward at times.  Of course.  My knees have still buckled and my stomach has surely turned.  I am human.  But one thing has definitely changed.

This one thing, I can tell you with a hundred percent truth.

I am no longer a prisoner of angst.

And I promise, you don’t have to be one either.

How can I be so sure?  I know this because, if it happened for me, it can happen for you.

The next question you’ll have to ask yourself is, “What will I believe?”

Do not be anxious about anything, but in every situation, by prayer and petition, with thanksgiving, present your requests to Go.  And the peace of God, which transcends all understanding will guard your hearts and your minds in Christ Jesus.
Philippians 4:6