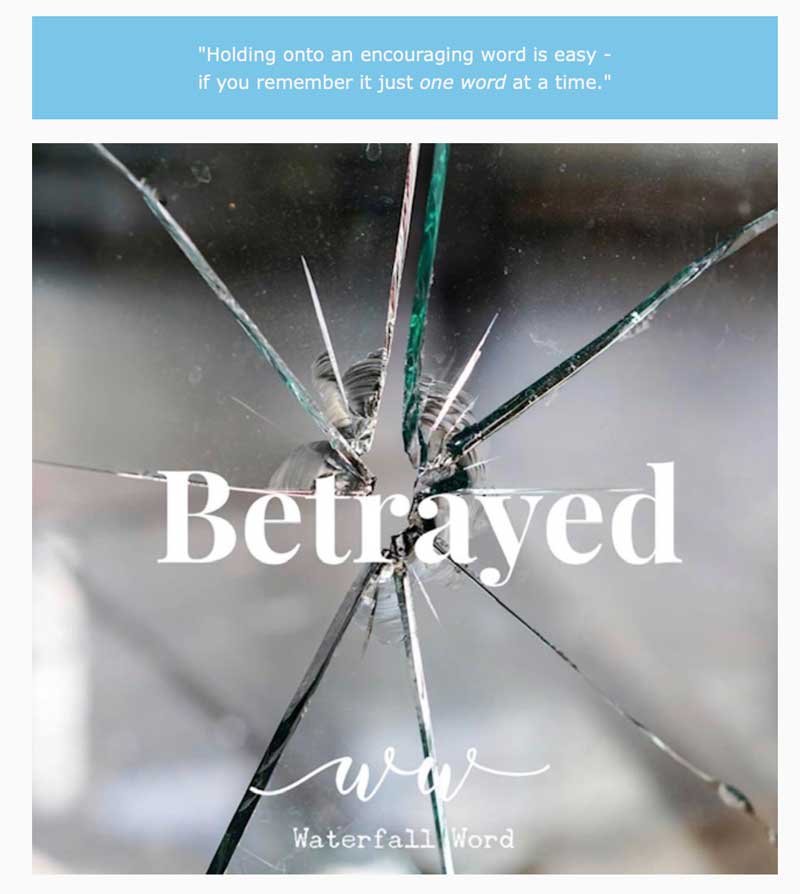 It happens in our friendships…

Why would she do that?  I trusted her, I thought we were close friends.  I didn’t see this coming.   I just don’t understand.

It happens in our marriages…

I can’t believe what’s happening. I trusted you!  You took a vow to love, honor and be true.  How could you do this to me?  To us?

The moment we find out we’ve been betrayed is one of the hardest moments in life.  I think it’s so painful because, honestly, we never saw it coming.  We weren’t expecting it.

Betrayal’s birthplace is the heart of a trusted person.

It wouldn’t hurt so much if we didn’t care about them.  We’ve invested.  We’ve spent the time cultivating this relationship. The foundation seemed pretty sturdy so we allowed the relationship roots to grow.  After a while, those roots ran deep, intertwining themselves into the very fibers of our soul.  A sense of security formed, a cocoon of loyalty established.

We let our defenses down.  We chose to care deeply.

Then in a moment it came. Like a thunderbolt it came out of nowhere.  Betrayalripped through the sacred fibers of our beloved trust.

The pain that followed mocked us.  It mocked us for trusting so sincerely.  It sneered at us for giving another human that kind of power to wound us so deeply.

Once the waves cease crashing over us, the ebb of the tide draws back and we breathe in a vow.  We will never give access like that – NEVER, EVER AGAIN!  Our trust has been shattered. Fragmented beyond repair, at least it seems so, in the moment.  We withdraw, maybe forever, from the one who decided that day to make a choice.

We slide into our cave of self-protection, licking our wounds, and replaying the bitter act over and over in our cursed minds.  We feel powerless and so unsure of what to do next.  Yet, what we do next makes all the difference in the world…

My friend is a family law attorney. It’s a job that many days he’d love to walk away from.  He’s there to sort out the pieces when a marriage is shattered beyond repair.  It’s a constant reminder – 9 to 5 – that at the heart of it all, betrayal happens.  People who once vowed to always love each other, to put each other first, have instead decided to make permanent the destructive tragedy of their pain.

So what can we do when we’re faced with the betrayal of someone we once trusted?  Is there any choice other than to just sweep up the shards of broken dreams, dump them into the pit of “never-again,” slam the cover down tight and limp away?  Or worse, just stay, numbing ourselves and pretending it didn’t happen… until it happens, again?

Dare we think that others who betray us deserve a second chance?  Or, a third? Heaven forbid more?   There are circumstances where many of us can muster a weak nod and say, perhaps yes. I can give them a second chance.   At least, I’m willing to try…

But many times – most of the time actually – the mountain of betrayal can be so high and so wide, than we simply cannot climb it or move past it – even if we wanted to.

Is there a mountain in a relationship that you once treasured?

Though betrayal is definitely ugly, and many times seems unforgivable, maybe, just maybe, we can find help to overcome and move past this giant mountain of pain.

Have you considered asking God to help you?  I know, I know, you might think that’s not a real solution to my very real pain.  But I promise you, it is.  Don’t make the mistake in thinking that what you’re going though is partly His fault.  That He could have stopped sit, preventing your pain, but simply chose not to. That’s not how God works.

He knows firsthand what it’s like to be betrayed by those he loved.  He actually cares deeply about your pain. Honestly, it’s Him alone, who can pick you up and give you the strength to climb higher than you ever thought you could.

He brings the morning ray of sun that will help you get out of bed in the morning, when you’d rather pull the blanket over your head and turn your face toward the wall.

You can feel the awful feeling of the betrayal, but you don’t have to let it grow roots in you. It can consume you if you do.

You can move through this and you will be free of it… but only if you choose to be.

It will require the “F” word, though.  Maybe not the word you’re thinking of, but it’s still a word that’s just as hard to hear –

Forgiveness doesn’t mean forgetting.  And it’s not a hall pass for more betrayal.  It’s not saying what they did is okay.  Forgiveness isn’t for wimps.  It’s a chiseling tool that seems to be for the other person, but actually, it ends up guiding us out of our own pain.

But only you can make that choice.  But if you’ll continue to hold onto His hand, you will make it through to the other side.

He will never betray your trust.

Jesus said to him, “Truly, I tell you, this very night, before the rooster crows, you will deny me three times.”   Matthew 26:34

Then he came to the disciples and said to them, “Sleep and take your rest later on. See, the hour is at hand, and the Son of Man is betrayed into the hands of sinners.” Matthew 26:45

For we do not have a high priest who is unable to sympathize with our weaknesses, but one who in every respect has been tempted as we are, yet without sin.
Hebrews 4:15

For I received from the Lord that which I also delivered to you, that the Lord Jesus in the night in which He was betrayed took bread; and when He had given thanks, He broke it and said, “This is My body, which is for you; do this in remembrance of Me.”
1 Corinthians 11:23-24