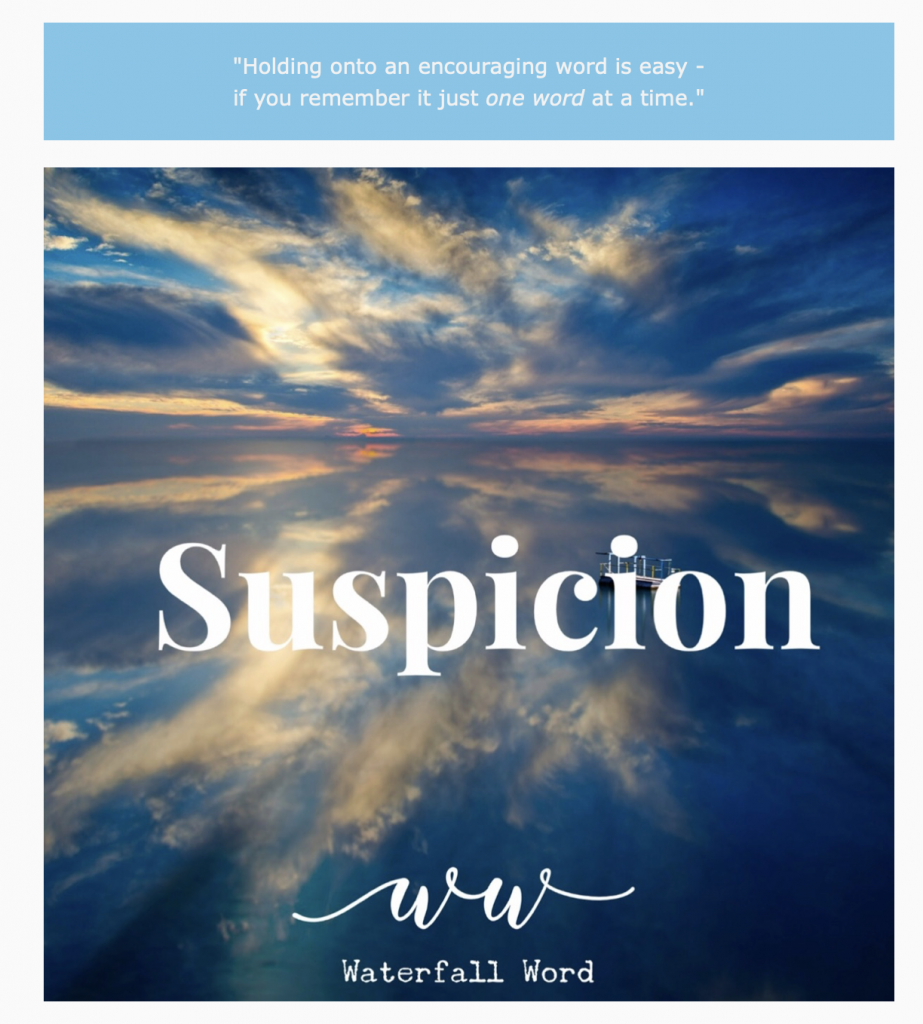 A fleeting thought at first. No big deal.  But then, it circles back.  Around again. Then, again. It becomes familiar.  We relax into it, almost welcoming it.  Soon, before we realize it, suspicionroots its tentacles so strongly in us that we just can’t shake it.  Without our awareness, it has become part of our thinking process.

Suspicion doesn’t play fair.  With methods so covert we don’t realize the destruction its capable of until we’ve succumbed to its patterns.

When we listen to the whisper of suspicion, we’ll soon find ourselves unsettled. We lose our balance. We become unsteady. It slowly steals our peace, one thought at a time.  Once this happens, our mind can’t help but go with it.  We try to follow it to some sort of an end.  But instead of finding clarity, we find it makes everything we thought we knew about the relationship, up for grabs.

Suspicion is a chameleon. It can hide in any relationship and show up at any time.  That’s why we need to learn to recognize it for the lethal enemy that it is.  If only it were that easy!

In the two scenarios below, can you can tell the difference between suspicion’swhispers and discerning wisdom?

•            My boss seems to be extra edgy lately.  I smiled and greeted him when he walked in today, but his answer was curt and he didn’t even make eye contact…  What’s his problem? He just stormed straight past me into his office and shut the door, practically in my face! I’m trying my hardest here, but it feels like I never can please him. I have a review coming up – I wonder if he’s going to fire me.  Probably.  He’s not happy with anything I do anyway.

•            Every time I hang out with that person, I end up compromising and doing things that aren’t really me.  She’s fun, the life of the party, loves having a good time – but I don’t understand a lot of her choices.  We’re so different. I get uncomfortable with her actions sometimes, but if I bring it up, she tends to play it off.  She doesn’t seem to acknowledge how I feel. I don’t want to hurt her feelings, but maybe it’s time to give our relationship some distance.

Could you tell the difference between healthy, discerning wisdom and unnecessary suspicion?  Could you visualize how easily suspicious thoughts could escalate a benign situation into a real problem?

Yes, suspicion is an instigator, a trouble maker.

Truth is, suspicion is just plain ugly, so ugly it masks itself so that it won’t be seen for what it truly is.

Suspicion can dress itself up so pretty, you’re certain to mistake it for wisdom.   Weird how two things, so opposite, can appear to be nearly the same.

Here’s the key – wisdom with discernment comes from a positive base .  Suspicion is negative based, yet nearly always disguises itself as positive.

Wisdom discerns itself based on truth and honesty.  Its ultimate goal seeks to be protective of relationship, but in a healthy way.  Suspicion is distorted and divisive, masking itself as intuitive.  Its aim is self-focused protection, viewing the world around it as threatening or robbing it somehow.

Wisdom, when practiced, allows healthy relationships to grow. Suspicion, on the other hand, breeds chaos in them.

Using my insecurities, suspicion will mix in just enough truth so that my worst fear manifests.  My trust in the other person is revoked until the suspicion can be addressed, gratified and resolved.  Problem is, suspicion is a glutton.  It’s never gratified.  It’s insatiable.

When suspicion is occupying our thoughts, it’s blocking our ability to love and to be loved.  It sucks every morsel of trust from our love, preventing it from growing – instead, choking and killing it.  The seeds of suspicion always grow weeds of doubt, fear, anger and a host of other ugly culprits. They sprout up inside of us, and begin taking over our heart, weed by weed.  It hardens and callouses tender trust, distorting it terribly.

So what do we do when suspicion begins vying for our attention?

Well, I think of it as a one-two punch, a process similar to killing the weeds in my yard.

Obviously, recognizing the negative voice quickly is important.  We can’t kill destructive growth we don’t admit lives in us.  But admitting its there and doing nothing won’t make it go away. And just cutting it off won’t do the trick either.  There’s a second step.  Think of the application of weed killer and uprooting, if you will.

First understand, we won’t be good at this at first.  It’s a process and just like growing any beautiful thing, it takes time and repetitive focus.  It’s not a one-time fix, but requires daily maintenance and care.

If we are to catch and stop those weed-like suspicious thoughts, we must immediately grab and toss them out as soon as we recognize them cropping up.  Then, right away, we’ll need to deliberately soak that area of our minds with healthy thoughts of what we know is right and good.  If we will first refuse to entertain suspicion, we can then recall the positives that we know are true.  We can call up gratitude, thankfulness and other fine friends to keep suspicion off the premises before it ever gets the chance to spread its wicked seed.

Like the nasty gossip in the group, who just can’t wait to share her juicy morsel with you, suspicion is always up to no good, ready to spread its destructive seed.  The sooner you begin to recognize it for what it is – and do something about it – the better.

The good news is, in time, with continued practice, this process will get quicker, easier and a whole lot less often.  And the best part? As this happens, others also will begin to recognize something – your beautiful garden, in full bloom.

They are conceited and understand nothing.  They have an unhealthy interest in controversies and quarrels about words that result in envy, strife, malicious talk, evil suspicions… 1 Timothy 6:4

She bears up under everything; believes the best in all; there is no limit to her hope, and never will she fall. 1 Corinthians 13:7